Approximately seven years of construction came to an end in 2006 with the completion of the museum buildings extensive restoration and modernization by the architect's office of Kulka and Partners (Cologne and Dresden). Classified as a historical monument, the edifice designed by Wilhelm Kreis in 1930 has at last returned to Dresden's cityscape as an impressive example of Functionalism. 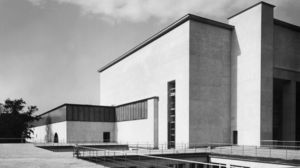 The museum building has an interesting past. The first, albeit inconclusive, competition for its design early in the Weimar Republic boasted entries from such well-known architects as Hans Scharoun, Ernst Pölzig, and the Luckhardt brothers. In the second competition held in the late 1920s, Wilhelm Kreis won out against rivals such as Heinrich Tessenow and Max Hans Kühne. The museum was finally built (1927-1930) on an attractive site between Grosser Garten and downtown Dresden. The structure's architectural language is as ambiguous as the period in which it originated. Suggestions of Functionalism blend with a conservative pull into monumentalism. The Viennese architect Gottlieb Michael conceived the interior décor, the aesthetics of were clearly borrowed from the Bauhaus school of design.

The air raid on Dresden in February 1945 seriously damaged the building and completely destroyed the development of the atrium. After rapid reconstruction the foyer was converted into the so-called Stone Hall, which served as one of the city's first postwar facilities for public events. In the 1950s the building acquired a congress hall based on plans by Alexander Künzer. The atrium later accommodated additional structures for the production of instructional materials. The condition of the building increasingly deteriorated for lack of maintenance during the years of the German Democratic Republic. An initial competition for the urgently needed major restoration work was won by COOP HIMMELB(L)AU (Vienna and Los Angeles), but lack of funding thwarted the project. By 1998 only the southern ancillary building containing a lecture hall, seminar rooms, and offices had been renovated. COOP HIMMELB(L)AU eventually withdrew from the project after complaints that the budget had been cut and parts of the construction cancelled. 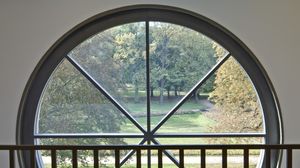 In 1998 the architecture office of Kulka and Partners (Cologne and Dresden) was ultimately selected to carry out the general restoration work. Professor Peter Kulkas design takes the building back to Wilhelm Kreis' original idea, dispensing with all the later additions. The result is an engaging, aesthetically persuasive, historical building of classical Modernism that uses a highly individual, contemporary architectural idiom. It is, of course, also a building that admirably performs all the functions of a modern museum.